With Suspended, Natasha explored the process of subjectivization as a process of disidentification, a subject in an in-between state. ‘Liminal’, from Latin līmen, means ‘threshold’, or “in between two different existential planes.” According to Arnold van Gennep, this term is used to “refer to in-between situations and conditions that are characterized by the dislocation of established structures, the reversal of hierarchies, and uncertainty regarding the continuity of tradition and future outcomes.” Such liminalities are core to the Croatian artist – based in London. 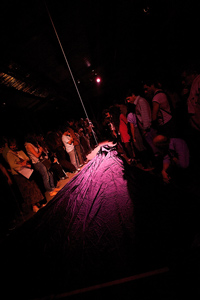 This interdisciplinary piece mixed elements from installation and live art, and was performed as a site-specific promenade, moving audiences around, following the artist in the search of her personal identity. Suspended connected symbols from apparently unrelated events in the form of images,words, sounds, objects, and rituals that recall Walter Benjamin’s ‘dialectical images’ in constellations. For Benjamin, such moments of dialectical recognition are monadic structures that bind together time and perception/knowledge in a non-repeatable ‘constructive moment’. The dialectical images were performed in a contemplative rhythm creating a metaphorical space in between realities. This tempo provoked the public to reflect upon what they were seeing allowing time to go back to installations already used by the artist in the performance or some that were to be revealed. Some audience members felt uncomfortable because of the space that was conferred to their act of reflection upon identity and others were drawn empathise with the artist’ experiences in an act of intimacy.

Suspended had one of the most powerful images of the whole festival. Surrounded by a mechanic soundscape, the audiences got through a black curtain into a smoky faintly lighted industrial space, and were confronted with an intimidating vision. The artist was suspended in the air, attached by her hair to the ceiling, sitting on a ladder which was hidden under her long dress. Once one got closer, her majestic figure vanished into a fragile, worried, and shivering woman. She then offered to the audience a big pair of scissors to cut the strings that trapped her. Once she was liberated, she carefully climbed down the ladder, helped by her protective assistant. Afterward, she started her displacement around the space in a metaphor of her life migrations. During the promenade, she encountered various objects displayed as installations. Each of them revealed itself, triggering unveiled stories. Her work explored the body’s physicality as a cultural signifier of memory, identity and migration, suggesting that the process of migration undoes a person at the seams. This rootlessness was substantial to her work and evident in the fragility of her performance.

In the chaired discussion, Natasha explained her personal displacement from a country (Yugoslavia) which eventually would disappear and fall apart while she was studying abroad. She suddenly found herself without a passport or national identity; in limbo for six years that eventually led her to sue the Croatian government for the denial of her citizenship. Wandering around has influenced and shaped her work, and constructed her personal identity. Natasha’s work poetically unfolds showing the lost of belonging. She is trapped in between identities. 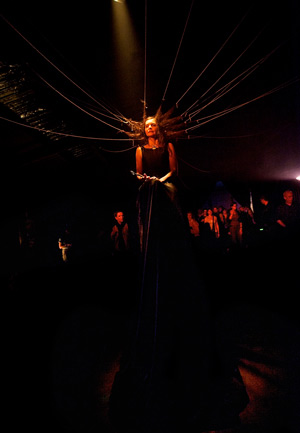 Suspended in the space between two worlds, can one of them ever become home? How do memories preserve identity? Does dust ever settle on the past? Does grass grow over it? Natasha Davis’ third solo show completes her trilogy on body, memory, identity and migration. Her poetic journey investigates marginal spaces and evokes migratory bodies burdened with past memories, present fears and f uture anxieties.

Born in Croatia and based in London, Natasha Davis is a performance artist who creates poetic and challenging interdisciplinary material. Her work is coloured and defined by migration and displacement experiences. She has presented work in the UK and internationally as a solo artist and has devised and collaborated with Pacitti Company, Marisa Carnesky, Sheila Ghelani and others as a performer, writer and dramaturge.